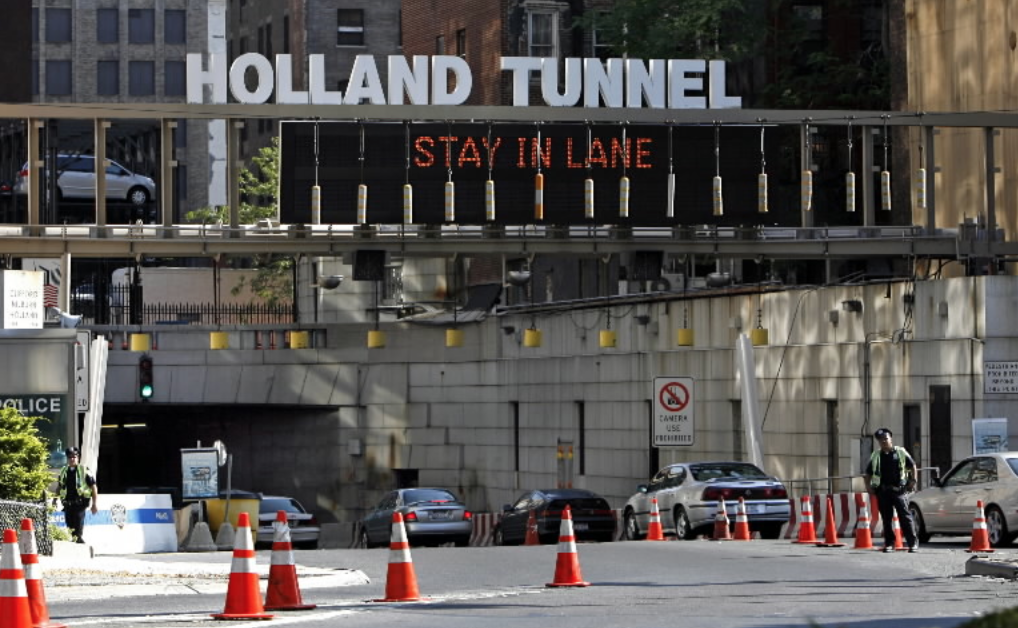 Everyone Hates When The Box is blocked…

New York City drivers know that blocking the box will bring unneeded heat to your car. Not only will you be blasted by a relentless onslaught of honking, you’re also sure to face jeers laced with foul language. To make matters worse, you also may wind up with a hefty traffic ticket. For many drivers in the city, nothing’s worse than getting a ticket. Moreover, many drivers will tell you the worst thing is to get a ticket that you think you don’t deserve. This is the case for a lot of drivers who feel ensnared by what seems to be unfair ticket traps. A recent news report has shed light on one spot in the city where drivers are demanding answers on what many are calling the Holland Tunnel ticket trap.

Drivers say NYPD traffic enforcement agents have been standing in packs on the corner of Thompson and Watts streets for weeks doing nothing to help the gridlock. The second commuters get caught blocking the box, the agents come waltzing up to their windows and print out tickets drivers have reported. Between 2:30 and 4:30 p.m. Thursday alone, the agents printed out 46 tickets. At $115 a pop, that’s more than $5,000 for the city.

City Has Stepped up enforcement this year

Earlier in the year, the city rolled out its Clear Intersections action plan. In keeping with Mayor De Blasio’s aggressive traffic enforcement strategies, police and traffic enforcement officers went out in force to write tickets in 50 targeted intersections throughout the city. The push for ticketing focused on the “spillback” law–also known as “block the box.” In support of the effort, the city hired an additional 50 uniformed officers in addition to the existing 3,000 member force to doll out violations for blocking the box.  A block the box parking violation can result in $115 fine. A moving violation can result in two points against your license and a fine of up to $138

To many drivers, a ticket trap simply seems like a way for traffic enforcement agents and the city to fund their own coffers.

Drivers who get tickets are very quick to ask: “Aren’t they traffic agents? Instead of giving people tickets, shouldn’t they direct traffic and delegate where drivers go?” After all, drivers have a right to feel this way if they see five or six agents on a corner just waiting for someone to get caught in that box. Instead, drivers say they should direct the traffic and help it move. After numerous complaints, Layton returned to the area around 3:30 p.m. Friday, and the agents were nowhere to be found. In fact, by Friday night, the agents were directing traffic instead of giving out tickets.

If you ask the city whether they really do care about safety or just playing a ‘gotcha game,’ they most likely will argue former.  “The agents are a limited resource,” said Chief Thomas Chan. “We want to discourage the motorists because they have a shared responsibility to operate their vehicles in a safe manner.” The city knows that getting a summons is a painful experience for every driver. Nonetheless. They also see it as a necessary evil that serves as a deterrent. Ultimately, the logic is that If you follow the rules, you’re not going to receive a summons at that location.

Be Cool Calm and Collected Drivers

We know how it is drivers, getting a parking ticket sucks! It can ruin any day and make a saint turn into a piping mad, foul-mouthed hot head. But even if traffic enforcement agents make you angry, they’re just doing the job they were told to do. Always be courteous and never t fight with the agent. Instead, put that energy to fighting the ticket in court if you think you have a shot!