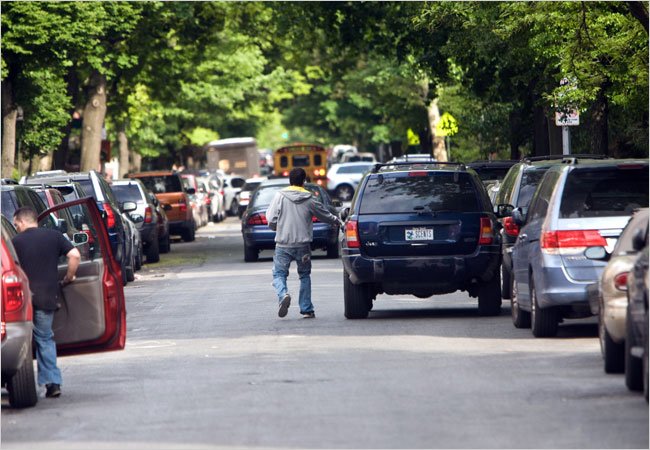 Double Parking Is A Rampant Problem in NYC

It’s a daily ritual for many drivers on the road in New York. In fact, it’s practically impossible for you to not see one car doing it as you cruise the city streets. Just as the daily sunrise and sunsets, tens of thousands of drivers openly break this traffic regulation every day. In neighborhoods across the city, you can catch drivers double parking left and right. Sometimes, even for hours at a time. Let’s be real, every driver in New York City does it at one point or another. After all, sometimes it seems like there’s no other choice. This is especially the case when congestion is at its highest during business hours. While we sometimes value convenience over safety, there are reasons why NYC outlaws double parking. Let’s delve into the phenomenon of double parking in NYC.

What Is Double Parking?

The term “double parking” refers to an illegal parking technique that causes a lot of headaches for people who live in urban areas like NYC. When most people think of illegally parked cars,  they visualize double parking. Here, a driver parallel parks alongside another car so that all or part of your vehicle is in a lane of the street. This parallel parking technique has a two-fold effect. It not only blocks the original, legally parked car in, the double parked vehicle will also block part of the street or bike lane if it’s present.

To limit the prevalence of this obstructive parking technique, the City has long designated double parking as illegal on NYC law books. Here the city defines illegal double parking in the NYC DOT Traffic Rules, 4-08 as falling under its general no standing zone regulations:

“  (f) General no standing zones (standing and parking prohibited in specified places). No person shall stand or park a vehicle in any of the following places, unless otherwise indicated by posted signs, markings or other traffic control devices, or at the direction of a law enforcement officer:

(1) Double parking. On the roadway side of a vehicle stopped, standing, or parked at the curb, except a person may stand a commercial vehicle alongside a vehicle parked at the curb at such locations and during such hours that stopping, standing, or parking is not prohibited, while quickly making pickups, deliveries or service calls, provided that there is no unoccupied parking space or designated loading zone on either side of the street within 100 feet that can be used for such standing, and provided further that such standing is in compliance with the provisions of §1102 of the State Vehicle and Traffic Law.”

Penalty For Double Parking In NYC

For drivers in passenger vehicles caught double parking, you can expect a hefty parking ticket at a steep price of $115. While commercial vehicles may also receive parking tickets for doing the same thing, the law gives some allowances. Commercial vehicles can only double park to make quick pickups, deliveries or service calls if there is no parking space or marked loading zone within 100 feet on either side of the street. Still, it really is up to the discretion of any traffic enforcer to decide whether or not you receive a parking ticket.

While many city drivers think you can’t get a ticket for double parking during street cleaning hours, this is unfortunately quite far from the truth. Even if you think you’re in the clear, many discover the truth to their unpleasant surprise: there’s always a risk you will get a parking ticket when Alternate Side Parking rules are in effect. Although they usually choose to ignore the practice, cops issue tickets for it all the time. They may issue a parking ticket even if you double park to pick up or drop off a passenger or items from your car. So while you can, in fact, dodge the double parking ticket in some areas when ASP is in effect. Don’t bank on it, you’re better playing it safe any learning the ways to avoid parking tickets during this time.

The Urban Costs of Double Parking

Double parking can have an immense impact on the quality of life of drivers, bikers and pedestrians alike. In densely populated urban areas like New York City, double parking is both obstructive and an extremely irritating source of great frustration.  Double parking is one of the key contributors to traffic congestion on urban streets. Double parking can even cause traffic to spill on to the sidewalks. This is especially true on streets with insufficient curbside space. For example, double parking plagues one Brooklyn neighborhood so badly, residents complain of drivers driving their cars on the sidewalk to dodge double-parked cars. This is obviously very dangerous for pedestrians and needlessly puts them at risk. Always remember drivers, you are not allowed to drive or park on the sidewalk at any time.

Even when double parking is allowed, it can have a negative impact on the surrounding blocks.  Have you ever tried to traverse a narrow street with a commercial vehicle that’s making a delivery?  With all the traffic and congestion that plagues this city, double parking only makes matters worse. However, drivers have to deal with the realities of life in the city. One of them is the simple fact that there are just not enough street parking spots for everyone. This is especially true when Alternate Side parking is in effect.

On the surface, double parking in NYC may seem like a risk worth taking. Sure you might get away with it when Alternate Side Parking rules are in effect and everyone else is doing it. But in reality, you’re better off trying to find an alternative spot to park.  Afterall, it’s really up to the discretion of the traffic enforcement agents on duty whether you get a ticket or not. If you rather leave it up to chance, be prepared to receive a pricey parking ticket. However, if you want to completely dodge the expensive fine for double parking, avoid doing it at all cost!